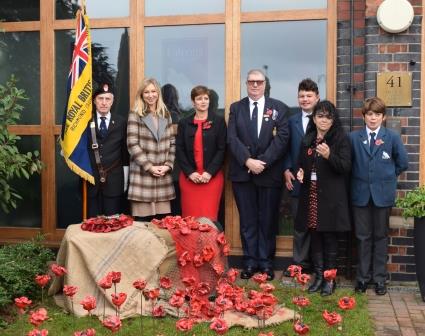 Falcons Preparatory School for Boys has creatively commemorated Armistice Day and the First World War Centenary, with the official opening of its Poppy Garden.

Inspired by the remarkable ceramic poppies which adorned the Tower of London, created by ceramists Paul Cummins and Tom Piper, pupils and staff members at the Richmond-based school have crafted their own unique ceramic poppies, each poppy including their family name. In a fitting tribute, a cascading flow of poppies has been formed in the school’s newly opened ‘Garden of Hope’, a space dedicated to those who sacrificed their lives.

Prior to gathering at the Garden of Hope for the official opening, pupils, staff and special guests joined together for an assembly held at the St John the Divine Church. A representative from the British Legion, David Burton the Poppy Appeal Organiser for Richmond and Surrey, and Standard Bearer Mike Foster, British Legion Chairman, spoke of ‘what we remember and what happened on 11th November’.

Director of Operations at The Poppy Factory, Sarah Casemore, informed attendees of the church ceremony the history of The Poppy Factory, an employment charity for veterans with health conditions or impairments, which also produces poppies and wreaths for the Royal Family and The Royal British Legion’s Annual Poppy Appeal at its Richmond factory.

Sarah also shared her thoughts about the significance of the poppy before joining pupils and guests back at the school to officially open the Garden of Hope.

Sarah Casemore commented: “It is wonderful that Falcons Preparatory School has taken the initiative to produce this magical garden of poppies to remember those who have lost their lives in the Forces. It is also a time to remember those who have come home from the Forces wounded, injured and sick. We know from our work at The Poppy Factory, supporting veterans with mental and physical health conditions back into employment, the challenges individuals face when they leave the Services. With our support they can go on to regain their self-esteem and financial independence.”

In further preparation for the momentous occasion, the school has been fundraising for The Royal British Legion by selling poppies to pupils and parents.

Head of Art and Design at Falcons School for Boys, Isabella Broadbent, added: “The boys have thoroughly enjoyed the process of creating their poppies for the garden, which is a beautiful whole school display that all pupils have contributed to.

“The project has evoked many discussions on the World Wars, with the pupils keen to learn what the war was really like.”

Headmistress at the Falcons Preparatory School for Boys, Olivia Buchanan commented: “It has been inspiring to watch the boys create their poppies and to be so inquisitive as to why they are doing so. We believe that it is important for the pupils to understand such a poignant part of British history, which is why we wanted to do something significant to commemorate the 100th anniversary of the end of World War One – the garden is a fitting tribute.”