We welcomed Year 5 boys and girls from neighbouring schools including The Vineyard School, St Stephen’s and Wetherby Prep, to participate in a top class rugby session alongside Falcons pupils. The event was hosted in association with Harlequins RFC, was held at the Richmond Athletic Ground.

Following the fun-filled class, the excited children had the highly-desired opportunity to tour the stadium with special access to areas including the main changing rooms. The pupils then replicated the journey that their sporting heroes would take, walking down the tunnel onto the pitch.

CEO of Richmond Athletic Association and Group Commercial Director at Richmond Rugby Club, Jimmy Wallace commented: “We have worked closely with  the Falcons School for Boys for many years and it was great to host such an enjoyable coaching session for the boys on our first team pitch where both Richmond & London Scottish play in the Championship. The schools involved in the masterclass have some promising sports stars and we were delighted to provide the facilities to help them to develop their skills.”

Director of Sport at Falcons School for Boys, Christopher Shaw added: “The boys thoroughly enjoy participating in top class sessions and the Rugby Masterclass was a fantastic opportunity for pupils from other local schools to benefit from our strong sporting partnerships. One of our key values here at Falcons School for Boys is ‘Sport for all’ and rugby, as one of our core areas for focus plays an essential part in this.

“Thank you to Richmond Athletic Association for hosting, we are delighted to be one of Richmond’s sponsors for the current season and we look forward to continuing to work with the club in the future.”

Those interested in finding out more about the school are invited to attend an open day on Saturday 17 March, 10am until 12 noon.  No appointment is needed, simply turn up to the school.

Register for our Open Day this September! 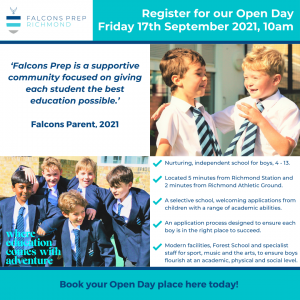