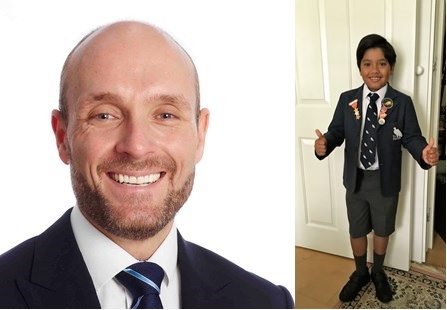 Researchers at the Institute for Fiscal Studies have released statements and statistics about the younger children in a year group and there is an ongoing debate in the Department for Education about whether or not to adapt the school calendar, making April the new September.

But Headmaster at Falcons School for Boys Pre-Preparatory School, Andrew Forbes, who is also an August baby, believes there is no reason to worry and offers advice and tips to concerned parents:

We meet a lot of parents who are anxious about their child not being able to catch up because he was born in the Summer. And while it is true that the 7+ entrance exam is geared towards chronological age and the older pupils are generally ahead of the younger ones early on in school, this can be overcome with the right type of instruction and guidance.

They key thing to remember is that every child is different: the right school should see a child’s true potential beyond their month of birth and will provide the targeted individual support required to help each pupil fulfil their true academic potential.

Sports is another area in which an age gap of 4 to 6 months can be noticeable. Up to the age of 6, there can still be a visible size difference between winter and summer-born children, and smaller children can experience a loss of confidence, especially with more physical sports. In these early years, it is key to understand a child’s physical limits and differentiate expectations accordingly.

If parents are worried about academic progress, there is always the option of one to one workshops and afterschool classes. Parents should speak with their child’s school and work together on an individual action to help him advance.

Some children benefit from re-taking a year and parents should not feel discouraged by this. If repeating a year will put a child in a better position in school life and their future career, then this option is worth considering. Self-confidence is key to any success.

However, we tend to find that by the Spring term the Summer born boys catch up to the older ones. Whilst the Autumn born boys have peaked, the younger boys are improving and this becomes a key time. It is important to stretch them academically so they can see their full potential. We have to get the balance right between supporting and pushing your child but not over working them. We don’t want them to plateau and we want to instil a love of learning. If a boy’s maths book, for example, has everything correct, he is not being extended regardless of his ability.

One example includes Kabir Ghosh, a past Falcons’ pupil who was born on the 25 August and has excelled in his academic school life. Kabir, (7), passed the 7+ exam with flying colours and now attends Westminster Under School. In 2016, he was accepted into the top five London Schools and had his pick of the bunch, turning down a prestigious scholarship.

Kabir’s mother, Priyanka Ghosh, believes parents shouldn’t fixate on their child’s birth date too much. She commented: “Kabir has a natural curiosity for learning, and he is well balanced. We never put too much pressure on him in terms of the entrance exams and didn’t stop him playing sports or music, which he loves, to focus on the exams.

“We never thought he was at a disadvantage because he was born in the Summer, we just had patience, love and confidence in him. It is true that with his sports, at first, he wasn’t the top pick in football, the boys who were almost one year older than him were. But at some point, the line blurred and now he plays alongside the boys who used to be in the higher team than him. He was however, the first in his reception class to read, his age made no difference to how capable he was in any aspect.

“Falcons School for Boys was wonderful with Kabir and they worked to bring out the best in him, as they do with all of the pupils.”

In terms of what parents can do at home to help their children it is simple: implement learning little and often. Read with them more, not just from books but in every day scenarios by applying reading to everything they do. You could also give them a little bit of pocket money every now and again and let them shop with it. Parents don’t do that as much anymore but it helps develop their mathematic skills and critical thinking. If they want to buy something from the supermarket they need to figure out how much of their pocket money they would need. If they have £2 for example it will teach them how to budget. These are basic life skills that don’t take up a lot of time.

At the end of the day, just remember if your son is a Summer baby and they are struggling, that doesn’t mean there is something wrong with your child, if they were born one or two months later they would be in the next year group and would probably be excelling.

(Courtesy of Angels and Urchins)