The Falcons School for Boy’s academics are going from strength to strength having been enhanced by two new high profile appointments, one in the EYFS (Early Years and Foundation Stage) department and one in the senior management team.

Ex-British long jumper, Fiona Walker has joined the Chiswick based Pre-Preparatory School as the new Head of Nursery and Emily Jones has been promoted from head of year two to Director of Studies.

Together, the two have brought a fresh new perspective to learning, driving academic achievements forward in the school.

Fiona, (35), has joined from Chepstow House School where she was a class and PE teacher. She formally represented Great Britain at international championships in the athletics team. Her drive and ambition translates into her new role and she is a strong female role model for the boys as well as for the parents who look to her for guidance.

A mother of two boys herself, Fiona is aware of what does and doesn’t work and is focused on identifying what is best for each individual family. She has brought in a new emphasis on reading and is developing the pupils’ key literacy skills as well as fine motor and gross motor skills.

Emily, (35), joined the Chiswick based school in 2015 from an independent school in Dubai. She has a vast amount of experience with 12 years of teaching behind her as well as holding the position of Numeracy Co-ordinator at her previous school.

This promotion has put her in charge of teaching and learning and one of her main responsibilities is to act as a mentor for fellow teachers. She will show them different and effective ways to educate the children, in particular how to engage boys. She has also been tasked with tracking individual value added scores and has rolled out an assessment based and enhanced curriculum, which works towards helping parents make individual choices for their son.

Headmaster at the pre-preparatory school, Andrew Forbes commented: “Fiona is proving to be a real asset and has really made the nursery her own. The boys are progressing incredibly well. She has achieved a lot in her career and is a true inspiration for teachers and parents.

“Emily is the driving force behind the staff helping them set and reach individual targets for each boy in our school. She has been a fantastic member of the team and has earned this promotion.

“Alongside myself and my team of staff, these women will deliver a refreshing new push towards the 7+ exams and academic achievements throughout the school.”

For a chance to meet these two incredible women and the rest of the fantastic staff at The Falcons School for Boys, please visit during their next open day in March. Visit the Preparatory School in Richmond on Saturday 4 March from 10.30am to 12.30pm and the Pre-preparatory in Chiswick is opening its doors on 11 March 10.30am to 12.30pm.

< Back to News
Open Days
BOOK A PLACE ON ONE OF OUR NEXT OPEN DAYS
Learn more >
Get in Touch
CALL US TO FIND OUT MORE
Learn More >
News
VIEW OUR LATEST NEWS
Learn More >
This website uses cookies to improve your experience. We'll assume you're ok with this, but you can opt-out if you wish. Cookie settingsACCEPT
Privacy & Cookies Policy

To find out more about our new 2021 Reception Class or Years 3-7 entry, please contact the Registrar for more information: registrar@falconsprep.co.uk 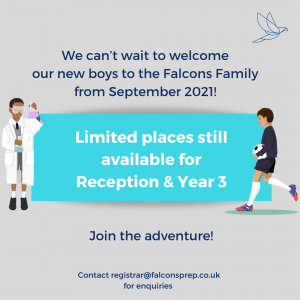