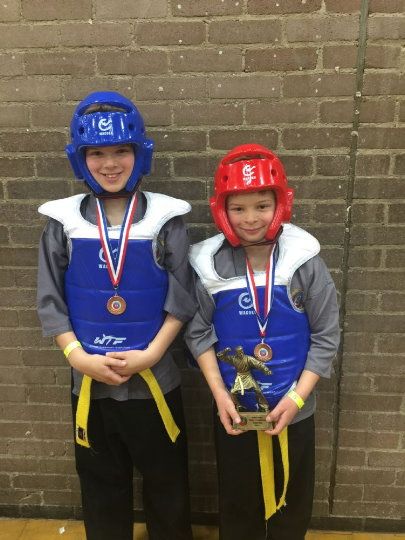 Two Chiswick brothers from Falcons School for Boys Preparatory School in Richmond have taken the top spots in a national Kung Fu Competition. Yellow belts, Sebastian and Ollie Crabb from Grove Park were incredibly successful at the Nam Pai Chuan competition held at Chiswick Community School, despite only taking up the sport one year ago.

Ollie, (9), came away with the gold trophy for Empty Hand Form, for the under 16s category which comprises of a series of attack and defence moves. He also won bronze in the 9 to11-year-old Sparring category, where he had to fight competitively using Kung Fu moves.
Sebastian, (12), was also the bronze recipient for the 12 to 14-year-olds category in Sparring. These impressive feats were all the more thrilling due to the competition being age categorised, meaning the Yellow Belts had to compete against every belt level from White to Black.

Head teacher at the Kew Foot Road school, Deon Etzinger commented: “We are extremely proud and impressed at Sebastian and Ollie’s achievements. They both did incredibly well considering they were both at the bottom end of the age categories and had to compete sometimes against challengers two years older than them.

“We are passionate about encouraging sports here at Falcons School for Boys and we enjoy celebrating when the pupils have great successes such as this.”

The brothers’ mum, Samantha Crabb added: “We didn’t expect it but the boys seem to have a natural ability for Kung Fu. They went up against some really big kids but it didn’t deter them. The whole day was really great.”

(Courtesy of the Chiswick Herald)
< Back to News
Open Days
BOOK A PLACE ON ONE OF OUR NEXT OPEN DAYS
Learn more >
Get in Touch
CALL US TO FIND OUT MORE
Learn More >
News
VIEW OUR LATEST NEWS
Learn More >
We use cookies on our website to give you the most relevant experience by remembering your preferences and repeat visits. By clicking “Accept All”, you consent to the use of ALL the cookies. However, you may visit "Cookie Settings" to provide a controlled consent.
Cookie settingsRejectAccept All
Privacy & Cookies Policy